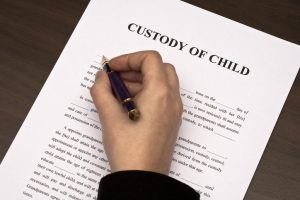 According to the appeals court’s opinion, the parents divorced following the mother’s affair with a married man.  The divorce decree named the parents joint managing conservators with neither having the exclusive right to designate the daughter’s primary residence.  The decree also incorporated an agreement for visitation, custody, and child support.  Eleven months later they both sought modification.

The stepfather was required to verify his sobriety through Soberlink when he had possession of his own children. Although he claimed it was unnecessary and he agreed to it to facilitate the disposition of his divorce, the mother told the father that the stepfather “had a drinking problem” and she needed somewhere else to live with the child. The stepfather was described as “very aggressive” and “an intimidating specimen.”

The trial court found a material and substantial change in circumstances and that certain modifications was in the best interest of the child.  The mother appealed.

The mother argued the trial court had failed to make findings of fact supporting limitations on her medical and education rights regarding the child.  The appeals court noted the trial court had made findings relating to a material and substantial change and the child’s best interest, which were the ultimate facts at issue. Additionally, there was nothing in the record showing the mother had requested additional findings of fact.

The mother argued it was not in the child’s “psychological best interest” to deny the mother educational rights as she had been the only parent involved in the child’s education.  She further argued that it was unjust to award the father the exclusive right when there was testimony he refused to co-parent. The mother had not pointed to any evidence in the record supporting her argument, nor was there expert testimony of what was best for the child psychologically. The appeals court also rejected the mother’s argument she was the only parent involved in the child’s education.  The court acknowledged that the mother was responsible for the child’s homeschooling, but pointed out there was evidence the father had arranged for educational opportunities for the child at a local church program to enhance her social and educational skills.

The appeals court also noted the trial court had granted both parties the right to confer with the other before making health, education, and welfare decisions.

The mother also challenged the trial court’s limit on her nightly calls with the child, arguing it was important for the child’s wellbeing to maintain connections with her siblings. The appeals court noted that the calls sometimes lasted up to an hour and a half.  This encroached on the father’s limited time with the child.

The mother also argued the father was not credible.  The appeals court noted that credibility determinations are up to the factfinder and it deferred to the trial court to resolve conflicts. The father’s testimony, if the trial court believed it, supported the trial court’s decision.

When one parent seeks modification, the existence of a material and substantial change is often a significant issue.  When both parents seek modification at the same time, however, the bigger issue is often what modifications, if any, are in the child’s best interest. Modification proceedings are highly fact specific, and as this case shows, evidence is extremely important.  If you want to change your child’s custody or visitation, an experienced Texas child custody attorney can advise you on your rights.  Schedule a consultation with McClure Law Group by calling 214.692.8200.