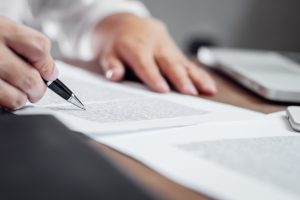 When parties to a Texas divorce case enter into a mediated settlement agreement (“MSA”) that meets the statutory requirements, the MSA is generally binding and the divorce decree must adopt the agreement.  An MSA may not be enforceable, however, if it was procured by fraud or other dishonest means.

A wife recently challenged a divorce decree incorporating  an MSA that she asserted was procured by fraud. A divorce decree was issued in Dubai and both parties appealed.  The wife subsequently petitioned for divorce and to modify the Dubai court orders in Texas. During discovery in the Texas cases, the husband disclosed one bank account.

WIFE MOVED TO RESCIND THE MSA

The wife subsequently moved to rescind the MSA, arguing it had been procured by fraud because the husband failed to disclose certain financial accounts.  She asked for time to conduct additional discovery to prove her fraud allegation. The husband moved to enforce the MSA.  The court denied the wife’s motion for a continuance.

The parties testified at a hearing.  According to the appeals court’s opinion, the parties’ testimony was inconsistent regarding what the wife knew and what information the husband provided.

The husband testified they did not exchange financial information at the mediation.  He further stated he had not made any representations about assets to cause the wife to sign the MSA.  He said there was an “exchange of financial assets” in Dubai and the wife had seen his bank an personal account records.

The wife acknowledged she had received some financial records in Dubai, but said there had not been financial disclosure because she did not have rights to the husband’s assets under Sharia law. She said the husband disclosed information from a joint account and one personal account. She said she learned about another account with about $1.5 million in deposits over five years from the records she subpoenaed. She said she would not have entered into the MSA if she had known about this account.

The wife submitted two affidavits detailing how she learned of additional accounts.  She stated the husband told her about five joint accounts and one retirement account.  She testified she was aware of those six accounts, plus the one the husband disclosed in discovery, at mediation.

The trial court denied the wife’s motion to rescind and the husband’s motion to enforce the MSA.  The trial court subsequently issued a final decree incorporating the terms of the MSA and addressing conservatorship and possession and access to the child.

The wife appealed, arguing the husband fraudulently induced her to sign the MSA by not disclosing complete information about the community assets. To prove fraud by non-disclosure, a party must show the other party deliberately failed to disclose material facts he had a duty to disclose and that the party did not know of or have an equal opportunity to discover them. The party also must show that the other party intended for them to act or not act based on that nondisclosure and that their reasonable reliance on the nondisclosure resulted in injury.

There is generally no duty to disclose absent a confidential or fiduciary relationship.  There may also be a duty to disclose if a party discovers new evidence that makes their previous representation misleading or untrue, created a false impression with a partial disclosure, or created a duty to disclose the whole truth by voluntarily disclosing some information.

The wife also argued the husband had a duty to fully disclose the financial information because he had disclosed some information that was misleading and created a false impression regarding the community property’s value. The appeals court noted the wife did not provide the context around the husband’s disclosure of the six accounts or the records she received in Dubai. The appeals court noted there could have been a duty to ensure the disclosure was complete in certain circumstances. Without evidence providing context for the disclosure, however, the appeals court could not find an abuse of discretion by the trial court in denying the motion to rescind the MSA.

The appeals court acknowledged the husband provided only one account in response to a discovery request for statements for financial accounts held in his name or jointly with someone else. It noted, however, that the wife had not explained how the answer would have created a false impression or how she could have reasonably relied on it when she knew about six other accounts. The appeals court therefore did not find an abuse of discretion in the trial court’s decision not to set aside the MSA.

The wife also argued the court erred in denying her motion for continuance and failing to rule on her motion to compel.  She argued she needed a continuance to conduct discovery to support her claim of fraudulent inducement.  The trial court asked her what support for the fraud claim justified granting more time for discovery when the MSA waived it.  The wife relied in part on Boyd v. Boyd.  The appeals court distinguished the Boyd case, pointing out that MSA included an express representation that the parties “made a fair and reasonable disclosure” of known property and financial obligations.  The MSA in this case did not include a similar representation.

Although the wife argued the husband had resisted responding to her discovery request, the appeals court noted she knew he had not answered discovery when she signed the MSA and had not used the available procedures to get those answers. The appeals court found no abuse of discretion in the denial of the continuance and no reversible error in the trial court’s failure to rule on her motion to compel.

ABOUT TO SIGN AN MSA? CALL MCCLURE LAW GROUP TODAY

This case shows the importance of being fully informed before signing an MSA.  If you are anticipating a contested divorce with the potential for hidden or undisclosed assets, a skilled Texas divorce attorney can help you protect yourself and your rights.  Schedule an appointment with McClure Law Group by calling 214.692.8200.